During the 2018-2019 school year the visual arts teacher implemented a number of arts integration units with the co-operation of the content specific teachers at Discovery Charter. The goal of arts integration is to employ the novelty, creativity and multi-modal learning potential of the arts to foster engagement with and understanding of traditional content areas.

While doing a unit on the periodic table of elements, students were given the assignment of creating a super hero or villain based on a specific element. Students were given research topics that would help them find the information specific to aspects of their character. Aspects of these characters that reflected the particular elements including color, superpower, weakness, best side kick, natural enemy and any transformational possibilities. Prior to the unit, students learned how to build bodies out of simple shapes, anatomy and super hero gestures during art class. The science teachers reported higher levels of enthusiasm, engagement and assignment completion. 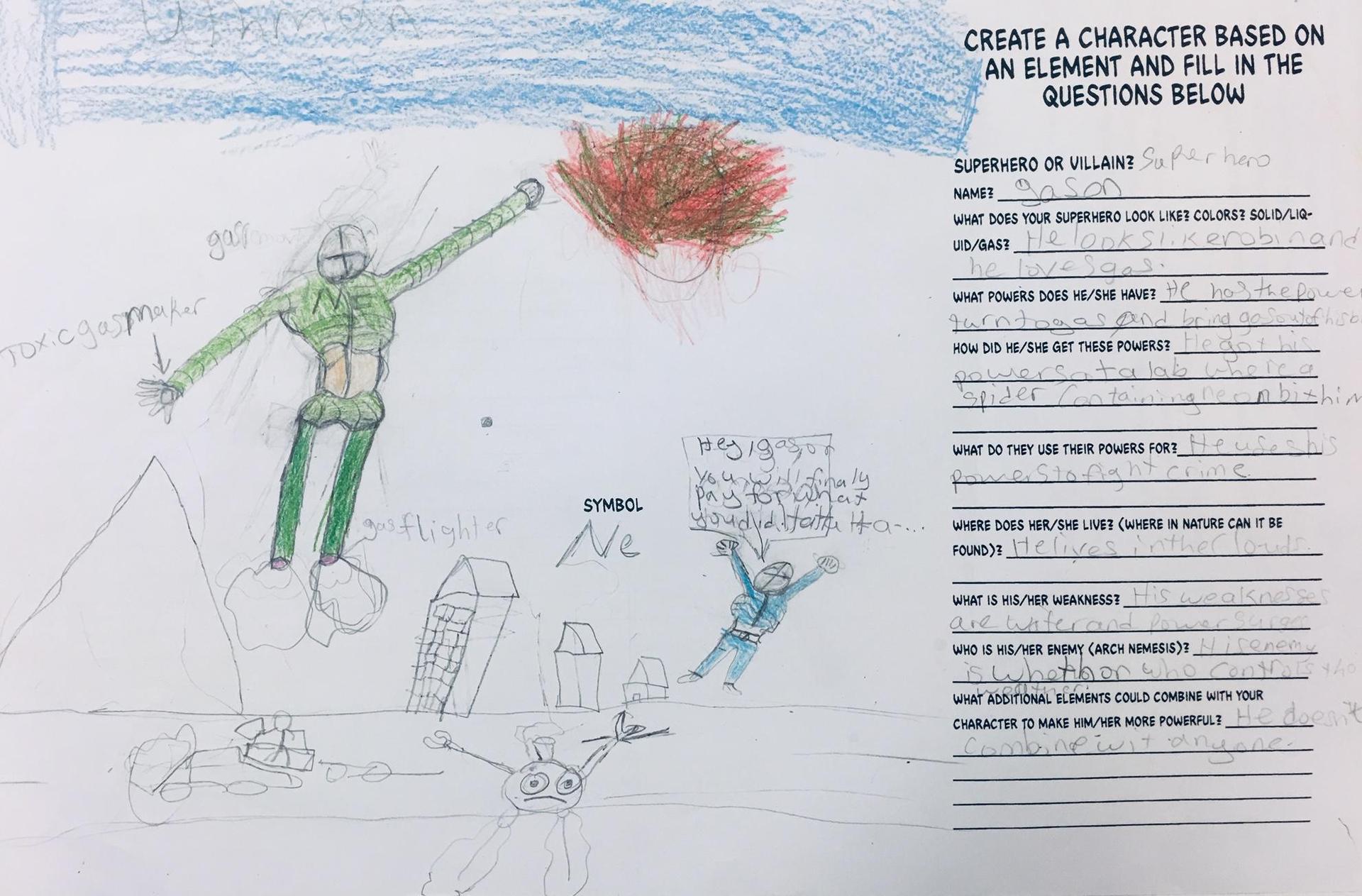 As a separate arts integration unit conducted in art class, students learned how artists use scientific evidence such as fossils and anatomy knowledge to create images of dinosaurs. They then were introduced to recent scientific theories, for example that dinosaurs may have had feathers, and asked to re-imagine dinosaurs based on these new ideas.

In the spring of 2019 the students were studying evolution. As part of this unit they read an extensive and complex comic book presentation of the important concepts. Many students expressed a preference for this type of textbook and the teachers reported a higher completion rate. In concurrence with the reading students had to create an animal with specific adaptive physical traits that filled needs specific to a randomly assigned biome. Prior to this assignment students had been instructed on how to build animal forms and anatomy with simple shapes and multiple drawings. 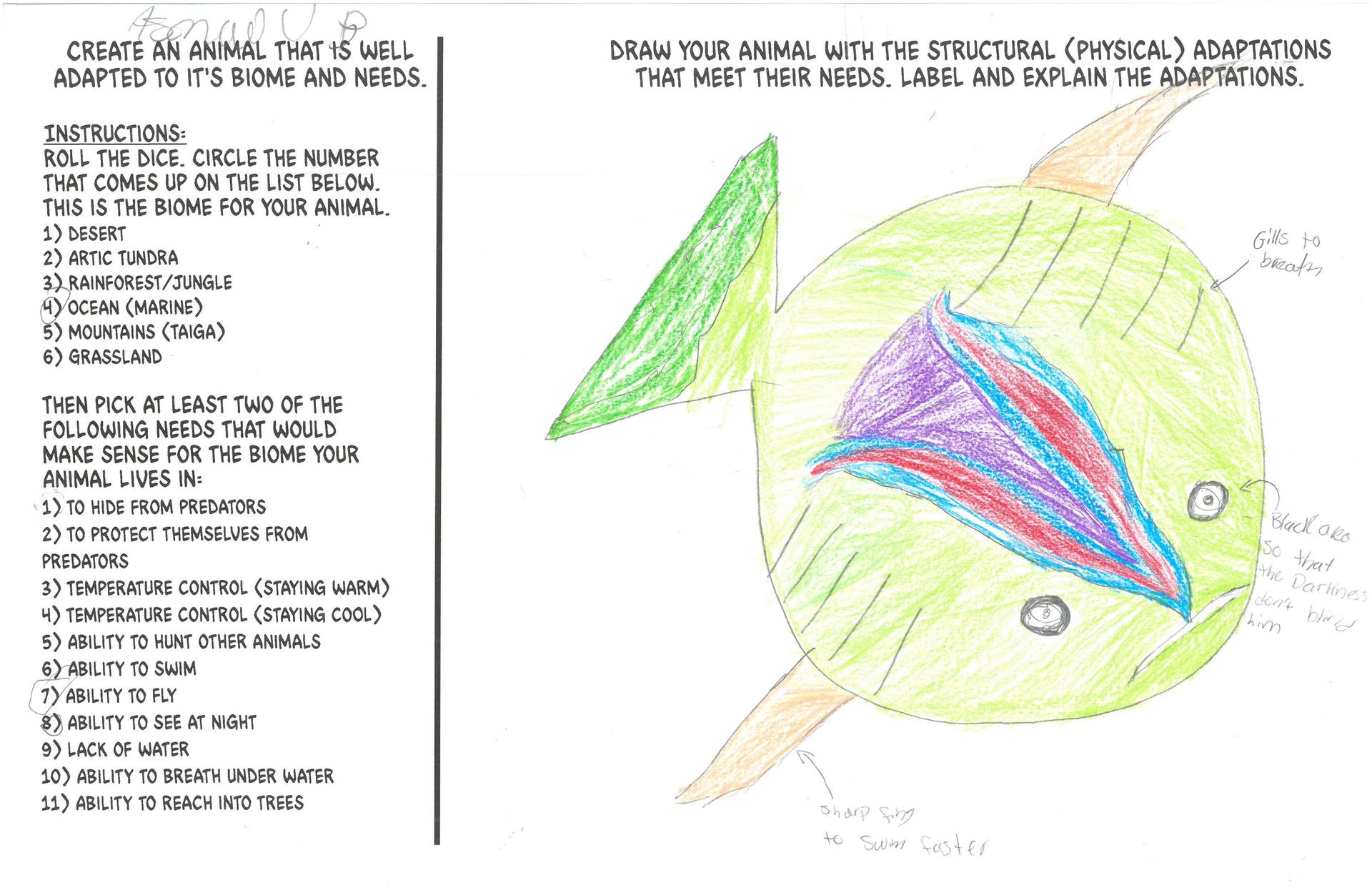 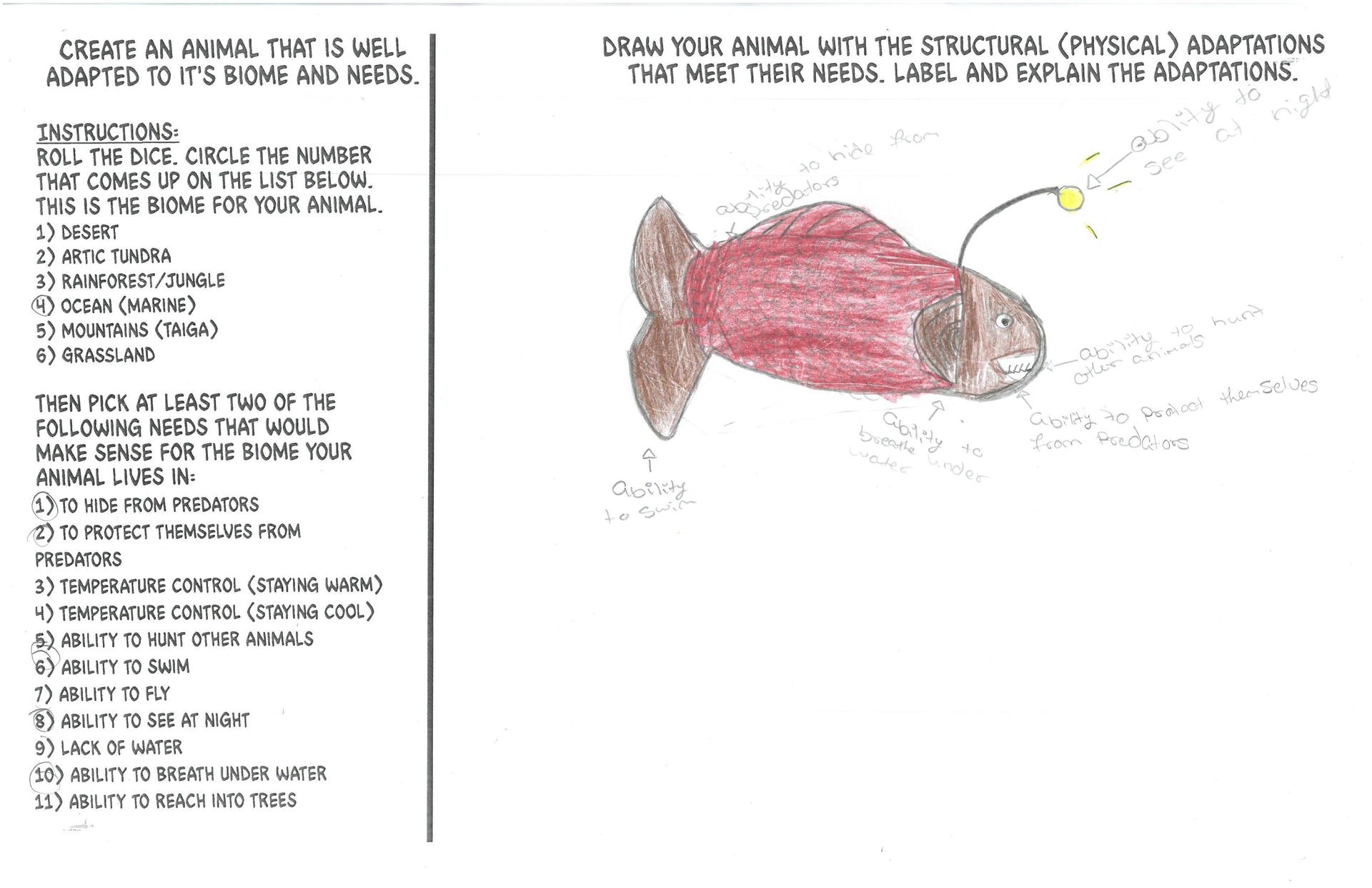 As a component of a unit on scale factor, students used math to scale up a simple drawing of a cartoon character. They were first shown examples of how renaissance painters and modern mural artists use this technique. They then were given drawings and a scale factor and had to calculate and create an enlarged frame and grid in order to redraw the character.

As a component of a geometry unit, students were presented with multiple examples of mandalas and their cultural significance. Then, using gird paper and a compass, they created mandalas that incorporated rotation and reflection. They then, using mathematical language, proved reflection and identified the center of rotation and angle of reflection.

Students were introduced to the visual story-telling tools of comics including word balloons for dialogue, facial expressions and gesture. They were given the assignment of translating a selection from their Roman-themed reading into a comic. In order to achieve this assignment they had to identify narration, dialogue, adjectives that described emotion as well as imagine setting and costume details. 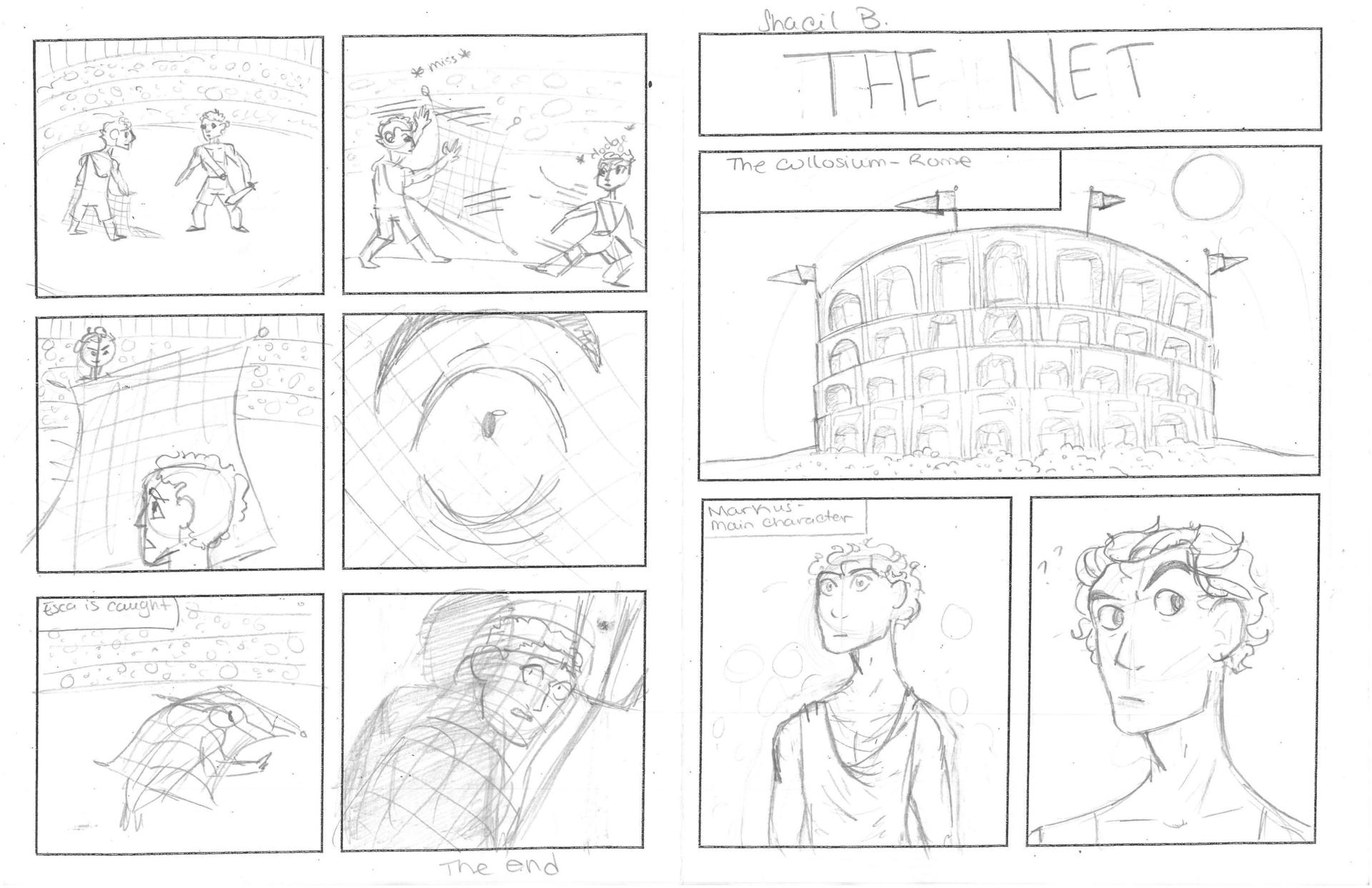 As a component of the Alice in Wonderland reading assignment, students designed and created a children’s book style illustration of the text. As part of this unit they participated in a discussion identifying the variety and limitations of visual interpretations of a text. Their final illustration included text from the original book integrated into the design. 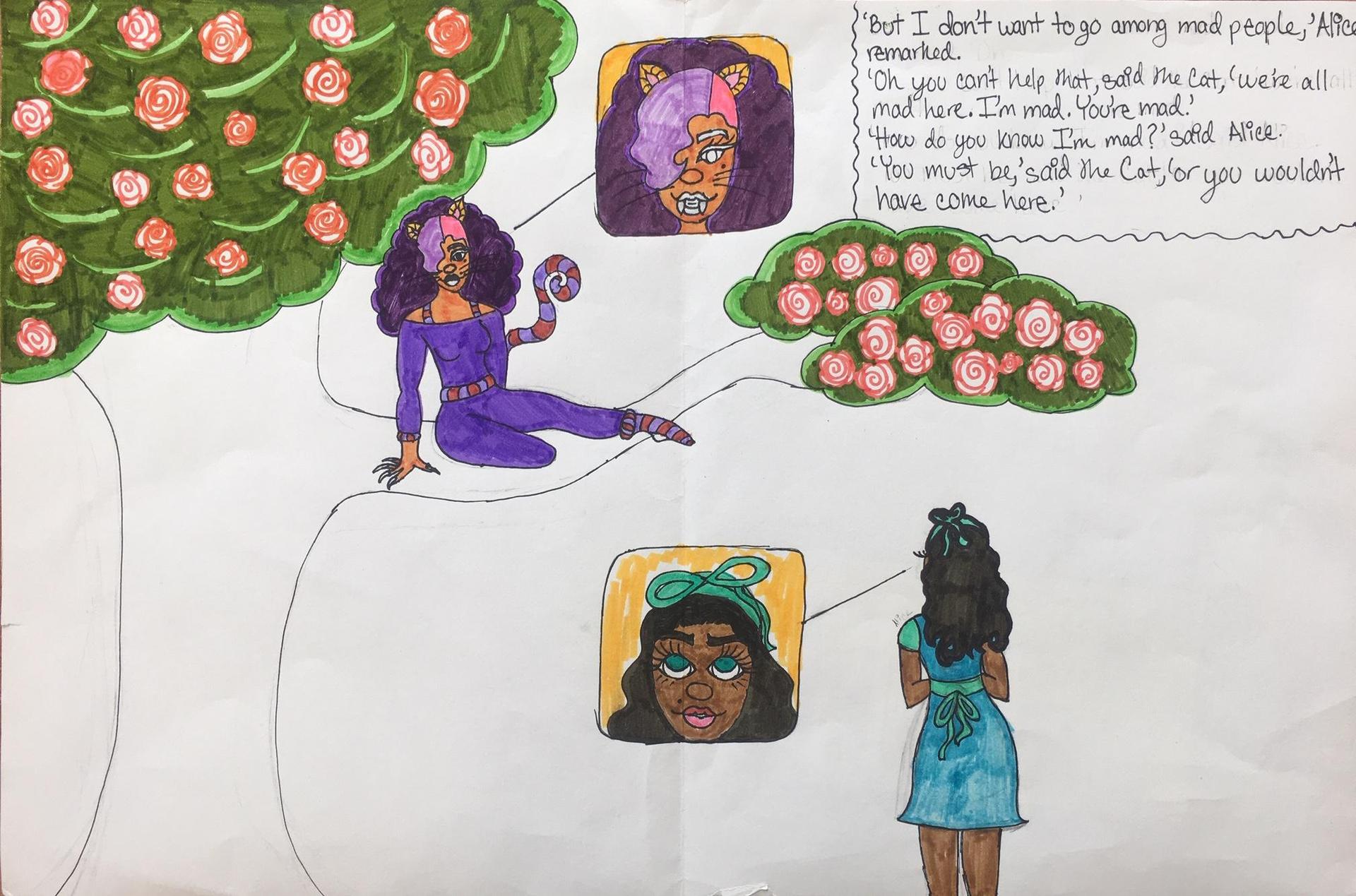 In the fall of 2018 the social studies unit was focusing on the society and politics of ancient Rome as part of a school-wide theme unit. Following several classes on the specific content, the students were introduced to the discipline of single image editorial cartoons. They were shown examples highlighting visual strategies such as use of scale, symbol and visual metaphor. Time was spent learning to draw Roman architecture and clothing. Then they were asked to create an editorial cartoon specific to Roman society or politics. Subjects included democracy vs. tyranny, the injustice of slavery, and the historical fact that many enslaved Greeks were more educated than their Roman masters. A selection of the work was displayed and the students did a gallery walk and noted which works were most effective and why.

As a separate arts integration unit conducted in art class, students learned how Greek and Roman monsters and mythical beings were personifications of specific fears of the time such as earthquakes or sea storms. They then identified modern fears and used those as a basis for new monsters of their own creation.

In the spring of 2019 students had an assignment in which they presented arguments in a mock trial setting. They were put in groups of five and one student in each group was tasked with doing a series of visual representations of the incident of the case. These drawings were then presented as supporting evidence. The social studies teacher commented specifically that the students who did the drawings engaged with the material and understood it at a higher level than they had during other units.

In the fall of 2018 the writing class was working on how to structure essays. They were introduced to a Roman memory technique called a Memory Palace in which a speech is memorized by imagining a different idea in a separate room and then walking through the palace in a specific order. They were then asked to apply this idea to a structure of an essay by designing a building that reflected the structure of their essay, imaging the path a visitor, the reader, would take through the building. For example, all visitors to the building would encounter the main idea upon entering a building and a conclusion right before exiting. The writing teacher noted that there were several students who were more deeply engaged than usual with this lesson and that engagement translated to a higher quality essay.

At the conclusion of the fiction writing unit students were introduced to the visual story-telling tools of comics including word balloons for dialogue, facial expressions and gesture. They were given the assignment of creating a single panel from their story that required these elements as well as a clear depiction of setting and caption box for narration text. 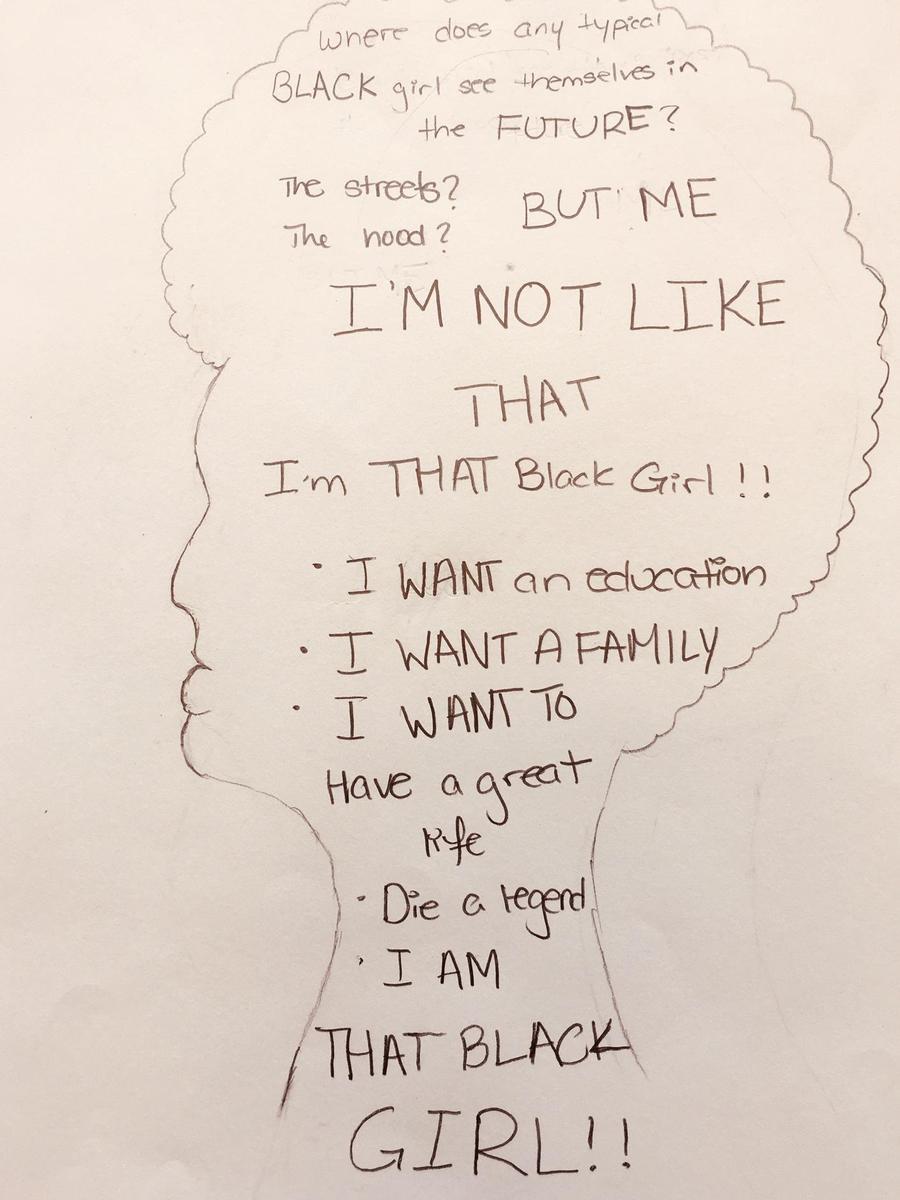 At the conclusion of the poetry writing unit students were introduced to examples of illustrated poems including Chinese landscape and English broadsides. These examples included strategies such as the use of symbols, lettering design and visual metaphor. Then students then created an illustrated poem that incorporated the text in the overall design.